A few years back a pastor-friend of mine was fired by his denomination because he was openly teaching that the penal-substitutionary atonement (PSA) theory was false; I believe he was going with an all-or-nothing presentation of Christus Victor instead.   Times seem to have changed – I recently visited a different congregation in that same denomination, where five different atonement theories were taught in one sermon, with the pastor having no qualms about expressing his dislike for several of them, including PSA.  The topic of atonement theories is quickly becoming less and less of something talked about only in some seminary theology class, and has become something discussed by everyday you’s and me’s all over the body of Christ.  (If this topic indeed hasn’t hit your corner of Christendom yet, I’d recommend Jeremy Smith’s blog post on the topic as a great cliff-notes edition to fill yourself in on what all the hubbub is about.) 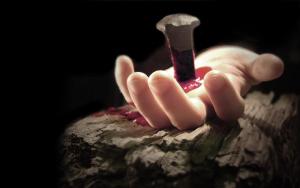 It does seem, however, as highlighted by my above example, that the real controversy in these matters tends to hinge on the PSA theory – the most widely known and recognized atonement concept in the church in the West for the past several hundred years.   For instance, very few people are busy debating Ransom Theory all that heartily (although it is the theory most akin to the version of atonement featured in Aslan’s death and resurrection in Narnia) but Ransom Theory doesn’t really hit us where we live as much as wrangling over PSA.

Here’s what’s at stake:  The topic is much less about “the atonement” as it is over the nature of God.   What’s He like?  What makes Him tick?   PSA says that God is retributive – that He must punish someone for sin, that He can’t forgive anyone unless someone is punished in their place.   Indeed, we are so accustomed to hearing this version of atonement that many readers might read that and think, “Yeah, so?  That’s all over the Bible, right?”  And that’s where the argument starts, with some saying that it’s not in there as much as one might think, and others saying it’s everywhere.

The argument gets more heated from there.   Those who object to PSA call it “Divine child abuse” – God sends His Son to Earth in order to mutilate him and pour his anger out on Him because he has an unquenchable need for blood?   Those who embrace PSA find such statements to be near blasphemous in their tone, and shake their heads at how people can misunderstand and skew the story in their summation of it.

So, brothers and sisters: I just want to have a talk with you for a moment about how you see each other.   I’m not going to weigh in either way about what I personally think about PSA in this post, but I do want to address the conflict for a moment if you’d allow me.   I want to affirm both sides of the fence here for one thing: you both are incredibly concerned about the image people get of who God is, and what He is like.   You both are fighting to demonstrate one thing:  that God’s act of sending His Son is an act of love.

Now, the issue is, in any atonement theory, the focus becomes the starting point, not the ending point.   WHY did Jesus die?   To ask the question “Why” sends us to the beginning of the process, to the need that needs to be met, or the question to be answered, or the problem to be solved, or what-have-you.   This is where all the theories disagree, when they go to the place in the story that looks back to the starting point and decides how the process gets one forward.

But at the end of the story – when Jesus gives up His Spirit and then, three days later, comes back – it doesn’t matter which version of the story you embrace, one thing is the same for all the stories: they all attempt to show that God really, really, really loved us.   Enough to send or let His Son go through all that.

Opponents of PSA look at their brothers and cast disparaging looks: how can you teach and believe in a God who needs a payment for things that have offended Him?  How can you believe or teach about a God who would do that to His own Son much less to anyone else?   But listen, well-meaning PSA opponent – there’s something you’re missing about what your PSA promoting brethren are seeing in all this.   To them, they really don’t care that God seems vengeful and bloodthirsty in their theory; they’re totally willing to give Him a pass to be that way, and why?   Because they can’t think of anything more intensely apple-cart upsetting, more table turning, than a bloodthirsty God turning that anger on Himself instead of them.

To them, this screams love like nothing else could. See, for all their preaching about a God of wrath, at the end of the story, they see Him put something else on display even in the midst of all that.  It’s deconstruction at its finest, for them.  Yes, we have a bronze-age diety acting all anthropomorphic and vengeful-ish, and then what does He go and do?  He flips the tables on Himself.   Despite all the fury of the universe-creator being aimed right in our direction for reasons that only make sense to Him, He put it all on His perfect servant instead of “me”, His lousy servant.  “I’ll take that” says your PSA proponent, “Because it’s crazy but intensely loving.  It’s not the anger or vengeance i’m looking at here, it’s the crazy end result – He was punished and I go free.   Man, that’s love.”   It might not make sense to you, if you don’t embrace PSA – but as hard as it might seem to your sensibilities, give credit where credit is due.  People cling to this theory because to them, its an incredibly wild, crazy, and unfathomable display of God doing exactly what you wouldn’t expect a vengeful God to do, reaching out to them at the expense of what makes sense – and in it, they see love.

On the other hand, to my PSA-embracing friends – try to give credit where credit is due.   Those who object to PSA still believe in the cross, and the burial, and the resurrection of Jesus.   They still believe that God’s love is what led Him to write this story, and that He sent His Son to write it.   They just see the dynamics of “how it works” playing out in a way that takes away what the beautiful parts are in your view, but replaces it with what to them is an image of a loving beautiful God sending His Son – one they also derive from Scripture.  I’m not saying that there isn’t something here worth discussing – or that the debate is fruitless.   But what I am saying is that both sides here are after the same thing: vindicating God’s character, and displaying a God of love.

You both just disagree on the beginning of the story. We all actually don’t disagree all that much on the end of the story: An incredibly unfathomable God showed His love for us, that while we were yet sinners, Christ died for us.

One thought on “God’s Love – Which Atonement Theory Demonstrates It?”