Only Attractive People Should Lead Worship

As I begin to write this blog post, Pope Francis has just left the USA after an exciting visit.   The 78-year-old pontiff has a magnetism that has been drawing lapsed Roman Catholics back into the fold, rejuvinated the long-time faithful, and which has also caused a crazy number of protestants to be found saying things they thought they’d never say such as, “Maybe I should become Catholic,” the bulk of whom are found immediately shaking their heads to counter their own words, as they suddenly remember they’d end up praying to Mary.

So what is Pope Francis’s secret?   Is it his hip clothes, or his trendy hairstyle, his slim and muscular physique, or his youthful appeal?   (Even though the media has recently burned his picture into our minds, perhaps a reminder photo of the man would be appropriate at this moment – therefore, behold Exhibit A below.)

The beautiful thing about Pope Francis and his appeal to the masses quite obviously has nothing at all to do with his outward beauty.   I mean, I don’t mean to insult him, but he’s a reasonably humble man so I don’t think he would be insulted for me to call attention to the fact that his most striking visual appeal has absolutely nothing to do with his hair, body shape, age, nor how well he has aged, nor his trendy style of dress, nor the fact that he wears glasses on a great many occasions.  The only really notable outward thing he has going for him is in fact his warm, loving smile – a smile that emerges particularly when he is up close and interacting with people.  (Exhibit B below.)

Popes come and go, and they all have their crowds.   But Pope Francis in particular has captured the attention of millions, and he will likely be known for two things: firstly, his humility.   If anyone ever makes or has made a wind-up Pope Francis doll, they would not be amiss to have it say over and over, “Please pray for me – please pray for me!”  which is what the pontiff consistently ends his encounters with when he meets people.   But secondly, he will be known for exuding love – for putting homeless people before politicians, and babies before the demands of official schedules, and crowds before the demands of his security team, and disabled people as worth his primary show-stopping attention.  This value towards people has made him a people magnet – with almost a million people braving the shut-down city of Philadelphia to come see him this weekend.

I was one of those people as I had the pleasure of seeing him drive by my roadside perch this Saturday.   But the story of what I saw didn’t end with Pope Francis.   The Roman Catholics really knew how to demonstrate an atmosphere with their convention.   When I arrived on the Parkway, the jumbotron screens were showcasing ballroom dancing on the Papal stage, the wonderous characteristic of which was that one partner of each duo was in a wheelchair.   I have to say I had never seen wheelchair dancing before, much less showcased before hundreds of thousands of people.   And later on, families would take the stage to talk about their love for their disabled children.   All of which was a strikingly different feel from the charismatic and evangelical conferences I had ever attended in my lifetime.

Somewhere along the way, we evangelicals, charismatics, and other protestants have sort of gotten the idea that to be popular, we needed to have an image – an image, unlike Pope Francis, that is based almost completely upon externals.   And nowhere is this image more carefully crafted than among our music and worship leaders.   Among smaller churches this is not quite as true, largely because there people are just glad to have anyone who can actually play an instrument and sing in time and on key, do so.  But in our bigger churches one will find a few things to be generally true: 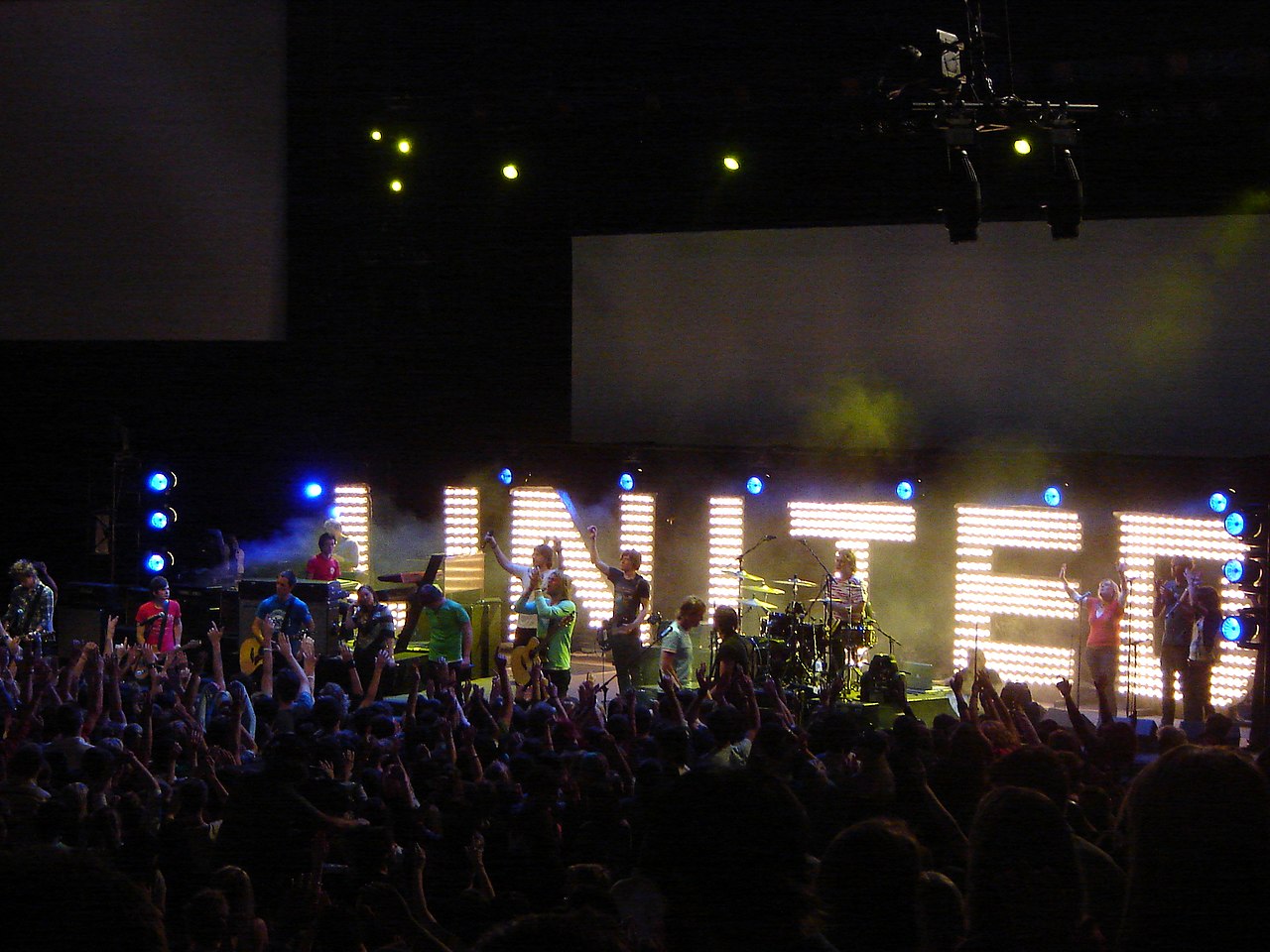 On the flip side, when have you ever seen someone leading worship come down off the stage to bless a baby?   Or give a hug to someone they noticed was crying in the congregration?   Ok, that’s pretty extreme, in general, and maybe even Pope Francis wouldn’t stop during mass to do such a thing, although with his track record no one can really be quite sure.   But there’s the rub – are we putting people up on a stage to lead worship that have reputations for love like that, where we really can’t quite be sure if their love for someone in the room might interrupt the show?   I’m afraid we aren’t.

And I think we ought to be – we ought to be choosing worship leaders for congregations (and pastors, for that matter) not based on how “anointed” they seem theologically and musically, (and certainly not because of who their parents are in the church – that’s a real issue too), nor even how moral they seem to be, nor how dedicated they themselves are to the Lord, except for dedication to the Lord that comes out by what see them doing with people.  Do they love?   Do they demonstrate the upside-down kingdom when they are off the stage? – not just their friends and the people they know — but the outcasts, or the new folk, or the strangers, or the poor, or the disabled, or the shut-ins.    And I’m not arguing somehow that attractive, well-dressed, youthful people without glasses should somehow now be passed over for worship leading positions.   God forbid.  Nor do I think there are no exceptions to the bleak image I am presenting here – thank God.

But overall, in the church, I think we’ve been worried about the wrong kind of image – we thought that if we put people with attractiveness up on stage, that people would be drawn to our churches.   And to some extent they have been.   But that natural sort of draw is nothing compared to the way hearts are drawn to the image of Jesus living His love out of the people we put on stage, just as people have been drawn to the image of Christ presented in Pope Francis.

Nothing is so disheartening to a worshipper than to have had a great worship experience, and to walk up to the person who led them into that place from the stage, only to find that person impersonal, or dismissive, or disinterested in truly connecting with them.  And please, I’m also not advocating asking worship leaders to “act” a certain way for P.R., out of duty or as a chore, to their congregants.   But rather, that people must be found that exude such qualities from their persons before they are ever put up on a stage – people who are as anointed to bring people into the presence of Christ without a musical instrument, through their sincere love for others and humility, as they ever are in song.  The sacred trust of a worship leader is not just that they lead a group of people musically, but that they are recognizing that they are brothers and sisters of the ones they are leading, and are in fact engaging in an act of service and fellowship in coming before the Lord together.

If it seems like a burden to ask that worship leaders (and pastors) be so available to the congregations they stand before, something might be wrong in our thinking – and in our hearts.  The medium is the message – and so when leaders only spend time with those on their own church social strata, or those who are attractive and socially valued, or when all the visible leaders themselves are only that which this world values most in terms of youth and attractiveness and strength, and when this is what is put on stage – people also get the message that the family of God and the worship of God is only for that type of person.  1 Peter 3:4 highlights that as the bride of Christ our beauty as the church should be inward, not outward, as we practice life together as an assembly.  But if we’ve lost our way, ekklesia – if we need to see a glimpse of what the kingdom among us really could or should look like, then we don’t have to look far.   A guy from the wrong denomination, one that we protestants are so fond of bashing, has already demonstrated it for us as he has made his foremost role as a leader to live like Jesus, leaving his friends and great leaders to instead spend time with the lowly and the stranger – and that, with great eagerness and joy.

God bless you Pope Francis, and I hope that all  of us among God’s people learn what you have been struggling to faithfully discharge – what it looks like to build the house of God not on the world’s way of valuing people, but on God’s.   As I pray for you, I also pray that we non-Catholics can learn to be as you when you have been following Christ in the eyes of the whole world.   And I thank the Lord for you.

***********
(PS – while on the subject – one awesome exception worth mentioning of an up and coming worship leader with a disability is Taylor Carpenter.  Click through to hear her music and see her page.)

3 thoughts on “Only Attractive People Should Lead Worship”

Follow All Things are Yours on WordPress.com
Join 514 other followers