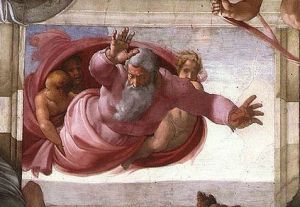 1) It rained today because:
a) God sent the rain upon the just and the unjust  (Matthew 5:45)
b) A warm moist air mass of 100% humidity was hit by cooler air, lowering the dew point and causing rain to occur.

2) Why do we see the sun rise everyday?
a) God causes his sun to rise on the evil and the good (Matthew 5:45)
b) The Earth rotates in a regular motion on its axis causing the sun to periodically come into view from our position on Earth.

3) Where does government and the authority to govern come from?
a) Goverments get their power from above.   There is no authority except from God, and the authorities that exist are appointed by God. ((John 19:11, Romans 13:1 NKJV)
b) Governments are instituted among Men, deriving their just powers from the consent of the governed… (USA – Declaration of Independence)

4) How does a fertilized egg cell turn into a baby?
a) God knits babies together in their mother’s wombs.  (Psalm 139:13)
b) A gene called G9a in the DNA of the child regulates tissue differentiation and during the rapid cellular division after uterine implantation, it causes various other genes in the DNA of the child which code for tissues and organ formation to be turned on and off at appropriate stages of embryonic development.

5) How were the stars and the Earth created?
a) God’s hand laid the foundation of the earth, and His right hand spread out the heavens; and when He calls to them, they stand forth together.  (Isaiah 48:13)
b) The young sun of our solar system was surrounded by debris left over from its formation, called a protoplanetary disk, which due to gravity and collisions within the disk eventually collasced into the planets we see today (more or less.)

6) Why is there a rainbow after a thunderstorm?
a) After the flood during the time of Noah, God hung up his weapon (the bow) and set it in the sky for all to see, as a marker of the covenant He made with the Earth to never again send a flood to destroy all mankind.  From that time forward, it reappears in the clouds as a memorial of that covenant. (Genesis 9:13)
b) Raindrops refract light from the sun, breaking it up into the colors of the spectrum, which appears as a rainbow in the sky.

7) Why is the shoreline located where it is at?
a) God told the sea, “This far and no further!” (Job 38:11)
b) Sea level is determined by the amount of water in the seas, the depth of the sea floors, and the height and slope of landmasses.  The amount of water stored in the polar caps changes over history, and therefore sea level changes throughout history due to global warming and cooling.  The shoreline is determined by this depth of the sea, and the erosion or upbuilding of the land due to plate tectonics and other geological factors.

8) Why do women have pain when they give birth?
a) It is a result of God’s judgment on Eve after she influenced Adam to eat from the forbidden tree.
b) Human babies have big heads.   Some other animals also have difficulties with childbirth.   It is possible to drastically reduce pain in childbirth through both alternative medicine and medical means.

7 thoughts on “The Causality Quiz”